We have many parents bring their children to physiotherapy for diagnosis, management, and treatment of their children’s sport-related pains. When should we be worried?

We can categorise sporting pain in children into two;

All sports have their risks for both types of pain. A gymnast can fall off a beam and sprain her knee and a footballer can develop knee pain over a period of time.

“Caitlin, we’re busy parents, cut to the chase; what can we do?”

Sudden injuries are accidents and some are preventable. With an injury risk assessment performed by a physiotherapist, the risk of some acute injuries can be identified and then considerably lessened with a specific exercise program.

Niggles can occur for many reasons, but the most common are;

The first two of these can be changed and the third can be respected (can’t stop your children from growing, sorry, they can’t stay cute forever!)

Physical load = amount of exercise stress a body is placed under, usually measured by hours per week. 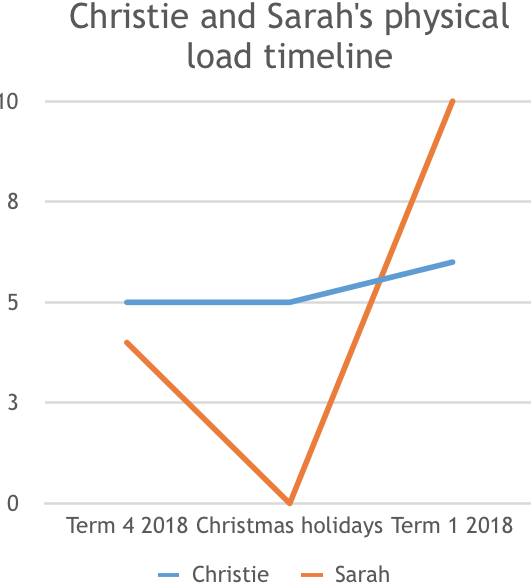 Christie (blue on our chart) is an 8-year-old girl who started her first Club Development gymnastics class at the start of school Term 1. She trains six hours per week. She loves to play and spent most of her school holidays running around the backyard with her friends.

Christie has gone from running around the backyard to 6 hours of gymnastics per week. Her physical load hasn’t changed much. She also isn’t of that ‘niggles’ would usually occur and she hasn’t had a recent growth spurt.

Let’s compare Christie to 13-year-old Sarah (orange on our chart), who has returned to competitive gymnastics after taking two years off to do casual dance instead. Over the Christmas Sarah has spent some time on her trampoline and LOTS of her time on social media (typical teenagers, #lame). Sarah is now training gymnastics 10 hours per week.

Sarah has had a BIG jump in load from #notmuch to a whopping 10 hours per week (pretty typical for a competitive gymnast).

Sarah is at risk of ‘overload’ pain or injury because of this sudden significant increase in load. She is also in the pubertal stage – she’s gone up one shoe size in the last 6 months, further pre-disposing her to injury due to her changing body.

This does not mean that Sarah just shouldn’t do gymnastics again. It also doesn’t mean that Sarah WILL get injured. This means that Sarah’s parents could reintroduce her to the sport slowly over a period of 3-4 weeks to decrease the shock to the body.

To reduce her risk of injury, Sarah should be put through a graded return to sport;
Week one – 3 hours
Week two – 6 hours
Week three – 8 hours
Week four – All sessions = 10 hours

Most people’s bodies will adapt well to this kind of graded introduction to load.

A tip for coaches: we plan our terms/seasons to achieve specific skills and goals in many aspects of our sports. In this planning, we should have “de-load” weeks planned every 4-5 weeks ensuring that the athletes’ bodies (and minds) get a short break without stopping training completely. This may include an ‘exploring skills’ week, a ‘basics’ week, or a ‘playful’ week. This significantly reduces the incidences of ‘chronic overload injuries’ whereby the athlete doesn’t get a physical break at all and their bodies start to show these ‘niggling’ aches and pains.

In the end, children grow, and often this basic change in their joints and muscles can be the cause of pain. If your child is complaining of pain during or after sport, they’re probably not just being pains, but they’re actually in pain. This can be managed really well!

Caitlin has been an Advanced Gymnastics Coach for over six years at Swan Districts Gymnastics and has had experience with the Western Force, Carlton Football Club, and the Western Australian Cricket Association. She is currently putting her skills to use with Kalamunda Rugby Union Club as club physio.

Caitlin is passionate about finding the best treatment for each individual person to not only relieve pain, but to improve strength, mobility, balance, and general function.